In many cases if a mains powered clock hasnt been 'messed about with or broken' it will be perfectly safe to operate with a new lead and a 1 amp fuse in the plug.

I don't want to be too much of a scare monger but these clocks are 50+ years old and wire and it's connections and sleeving degrade. You wouldn't want to live in a house with 50 year old wiring and so the best option is to renew the internal wiring and coil winding if the clock has an electrical problem.
The earlier clocks seem to have a higher risk in that some internal metal parts connect to the outside. Untouched there would probably never be a problem with a clock at 230v - but if for example the clock fell off the wall I could see that it is likely the mains could connect to the metal parts of the clock - dial, setting knob - etc. The insulation on many of these clocks is breaking down.
Modern safety standards would not allow a product of this construction to be sold working at mains voltage.

A recent overhaul of a Smiths/Jaeger mystery clock was rather exciting, as the whole metal structure of the clock was live !! A dangerous repair using bluetack to insulate a wire !! had not worked - surprise surprise !!

The driving coil inside the rotor casing has various possible points of failure. The connections can breakdown and the insulation can breakdown. The 1931 precaution was to put an insulating layer of paper between the rotor and the movement(external). Doesn't seem like much for 230volts and up to 13amps(or 3amps if the fuse has been thought about) from the mains. The internal rotor drives a composite wheel and so insulates fairly well. The winding is also enclosed on a plastic former but these do not meet current European electrical insulation requirements.

This is the original rotor from a working wall clock and that nick in the red wire is 230V. I didn't do it and it could have been there since the clock was first assembled, but it does demonstrate how it is possible to get mains voltage onto the movement.

This is the rotor from a de luxe movement that I recently had. That bare wire would carry mains voltage. It would appear that the insulation has crept back or has been moved back during overhaul or when the clock was dismantled.
Again, in itself this doesn't cause a problem but it is very close to the clock metalwork !

USA TO UK
UK TO USA 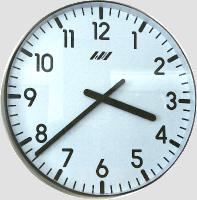